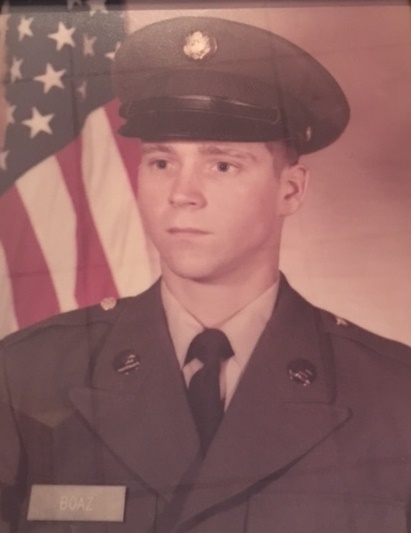 William T. Boaz, Jr., 59, of Marion, passed away at 11:32 AM, Friday, January 20, 2017 at the VA Medical Center in Marion. William was born on February 3, 1957 in Marion to William T. and Myrtle (Huff) Boaz, Sr.  HE joined the United States Army and was stationed in Germany during the Vietnam War.  Once honorably discharged, he returned home and began a career at Maytag in Herrin until it eventually closed. In his spare time, he enjoyed being outdoors fishing at various spots or hunting for squirrels, rabbits and pheasants.  He will be missed by his friends and family. Survivors include- Son- Billy Boaz and girlfriend Tammy Gunther of Marion Grandchild- Kiley Boaz of Marion Sister- Teresa Boaz of Marion He was preceded in death by his parents and grandchild- Robert Michael Boaz. The funeral service will be held at 11:00 AM, Saturday, January 28, 2017 at Mitchell-Hughes Funeral Home in Marion.  Rev. Don Colson will officiate.  Burial will follow at Cana Cemetery in Goreville.  Military rites will be performed at graveside by the Marion VFW and American Legion Posts with assistance from the Illinois National Guard.  Visitation will be from 9:00 AM until time of service, Saturday, at the funeral home. Memorial donations may be made to support Homeless Veteran’s and will be accepted at Mitchell-Hughes Funeral Home/ 800 N. Market St/ Marion, IL  62959.
To order memorial trees or send flowers to the family in memory of William T. Boaz, Jr., please visit our flower store.