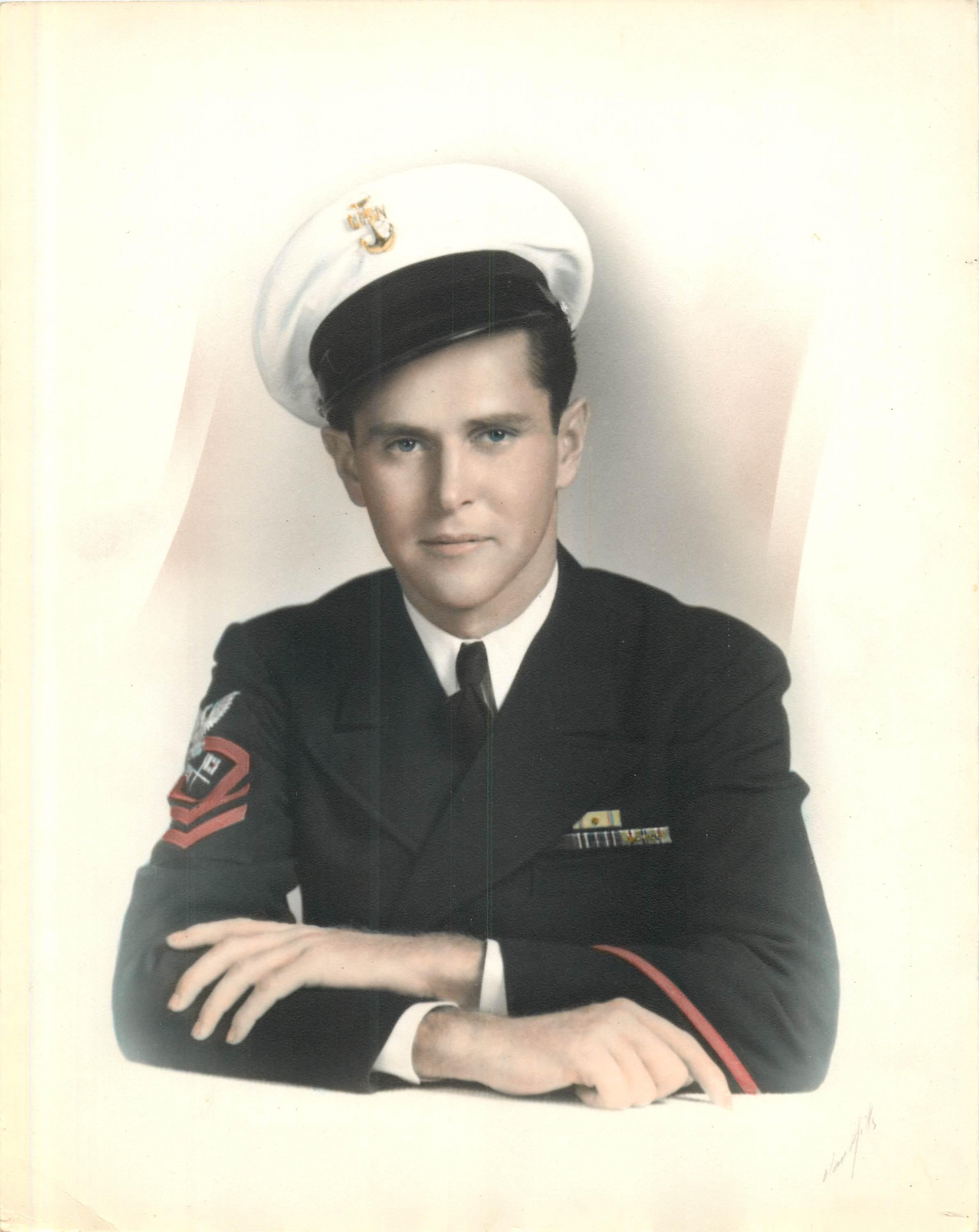 Zeigler- Thomas Lavern Underwood, age 98, of Zeigler, passed away at 7:30am on Friday, September 29, 2017 at his home in Zeigler.   He was born in Herrin on July 15, 1919, the son of Fred and Mabel (Thomas) Underwood.  Thomas grew up a poor, depression era, farm boy, fatherless at age 4 until his mother remarried widower Neber, adding two lovely step sisters and a step brother to the mix.  However, to talk to him he was always positive and the only one who didn't think he had a hard life. As a teenager, he joined the CCC, much against his beloved Welsh Grandfather's very strong will, surveying the rough wilderness areas in Idaho. As an 18 year old and with his mother's required consent he was then able to enlist in the Navy prior to WWII, stationed in Pearl Harbor, this time making his grandfather very proud and thus healing their rift. He was assigned to the USS Portland, a partnership that would come to define much of his life. The Portland was seldom out of action in the Pacific Theatre and would garner a prestigious sixteen Battle Stars for her service that included pivotal battles at Coral Sea, Midway, Tarawa, Surigao Straits, Okinawa, and the sea battle at Guadalcanal that was the last surface-to-surface battle in Naval History and what Thomas would later describe as simply a bar room brawl. Throughout all action Thomas was at the hub of communications and had the best seat in the house atop the bridge's signal deck. The Portland went on to become one of the most decorated vessels in United States Naval history and was accordingly honored as the ship to accept the Japanese surrender at Truk in 1945.  Thomas was a man of honor and integrity who epitomized the very best values of The Greatest Generation. He was also loved by his family and friends for his intellect, quick wit, passion for dancing, and never ending capacity to charm the ladies, especially the love of his life Carole DuMontelle from Thompsonville who preceded him in death.   Survivors include his son- Thomas Lon Underwood of San Diego, CA; Cousin- Mary Faye Parrish of Plumfield, IL; Niece and Caregiver- Lisa and Dale Martin of Zeigler; Six Grandchildren; and Fourteen Great Grandchildren.  He was preceded in death by his parents, son- Neil Kevin Underwood, two brothers- Larue and Fred Underwood, step-brother- Bill Neber, and two step-sisters- Gladys Cronin and Freda Reimer.   A memorial graveside service to honor Thomas’ life, will be held at 2:00pm, Saturday, October 7, 2017 at Cana Cemetery in Goreville.   Military honors will be provided by Herrin’s VFW and American Legion Posts with assistance from the United States Navy Ritual Team. Johnson-Hughes Funeral Home in Herrin is assisting the family with final arrangements.  Family and friends are asked to gather directly at the cemetery.   Memorial donations are suggested to the Semper Fi Fund and will be accepted at Johnson-Hughes Funeral Home/ 201 S. 13th St/ Herrin, IL  62948 or may be made online at www.semperfifund.org.  For more information or to sign the memorial guest register, please visit www.hughesfuneralhomes.com.
To order memorial trees or send flowers to the family in memory of Thomas Lavern Underwood, please visit our flower store.