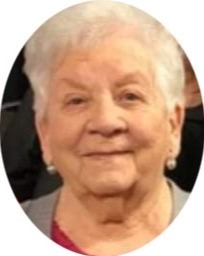 Norma was born on September 10, 1932 in Marseilles. IL to Amos and Elsie (Rice) Coleman. She received her education in Morris, IL schools. She married Lavern F. Thompson on September 24,  1949 in Morris, IL.  They made their home in rural Morris.  After her husband's death Norma moved to Marion, IL.

Norma was self-employed as a hairdresser for several years.  Then worked at Humiston-Keeling and Louie's Bakery both in Morris.  She finished her working career as an accomplished baker creating beautiful cakes for all occasions. Norma was a member of the congregation of Jehovah's Witnesses in Marion, IL.

A Memorial Service will be held Saturday, January 14, 2023 at 10 am at the Kingdom Hall of Jehovah's Witnesses, 3020 IL-17, Morris, Illinois with Bro. Landon Andrejeski officiating. Her ashes will be buried next to her husband in Sample Cemetery in Morris. Illinois. Mitchell-Hughes Funeral Home is assisting the family with arrangements.

To order memorial trees or send flowers to the family in memory of Norma Jean Thompson, please visit our flower store.