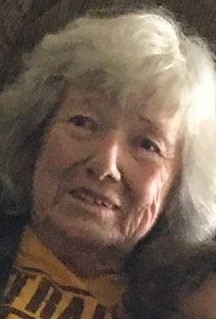 Judith “Judy” (Taylor) Holderfield, age 76, of Herrin, formerly of Bush, passed away peacefully in her sleep at 10:42pm on Saturday, August 7, 2021 at The Arch Rehab Unit of Helia Healthcare in Energy.

Judy was born in Herrin on September 15, 1944, the daughter of Chester and Hazel (Williams) Taylor. She married Malcolm T. “Mack” Holderfield in Herrin in June of 1992. He preceded her in death on September 4, 2014.

Judy was a loving mother, grandmother, sister and all around family woman...always putting everyone else before herself. She loved deeply and never hesitated to tell you when she loved you. She will be deeply missed by her entire family. May the love she taught carry on for generations.

Kenneth Taylor and Wife Gloria of Charlestown, IN

For those who prefer, memorial donations may be made to the family. Envelopes will be available and accepted at Johnson-Hughes Funeral Home; 201 S. 13th Street; Herrin, IL 62948.

To order memorial trees or send flowers to the family in memory of Judith "Judy" Holderfield, please visit our flower store.